So like many others I saw the news the that the Sailor Moon Eternal movie part 1 and 2 are coming to Netflix so of course I had to talk about. Comment below your thoughts and let me know what you thought of this news.

Remember I come out with new videos every Wednesday & Saturday so please subscribe if you haven’t already. Also please click the bell icon to turn on post notifications so that you’re notified when a new video is released.

Since its now officially May of course that means its time to do my monthly wrap up video for the month of April. Plus my TBR for May of anime and manga I plan to enjoy. Also comment below any manga or anime you finished during the month of April and what you plan to watch or read during May.

Remember I come out with new videos every Wednesday & Saturday so please subscribe if you haven’t already. Also click the bell icon to turn on post notifications so that you’re notified when a new video is released.

Remember I come out with new videos every Wednesday & Saturday so please subscribe if you haven’t already. Also be sure to click the bell icon to turn on post notifications so that you’re notified when a new video is released.

Since its now officially March its definitely time to do another anime and manga wrap up of everything I finished during the previous month. Also I give a look at what I plan to watch and read during the month of March. So enjoy and comment below your thoughts and suggestions.

Remember I come out with new videos every Wednesday & Saturday so please subscribe if you haven’t already. Also please click the bell icon to turn on post notifications so that you’re notified when a new video is released.

I decided to think up this fun little topic for this Saturday. So think of so anime characters that you would love to have class with if you were still in school. Check out the video to know more about what characters I chose.

Remember I come out with new videos every Wednesday & Saturday. So please be sure to subscribe if you haven’t already and click the bell icon to turn on post notifications so that you’re notified when new videos are released.

So I’m finally back with a part 2 for my who is the strongest Sailor Scout. This time though I’m counting down who is strongest outer Sailor Scout. So check out where I may have placed your favorites and feel free to comment down below with your opinions. Plus like always be sure to comment any ideas you would like to see.

Also remember that I come out with new videos every Monday, Wednesday, & Saturday. Plus be sure that if you’re enjoying my content to be sure to click that subscribe button. Also be sure to click the bell icon to turn on post notifications so that your notified when a new video is released.

Who Is The Strongest Outer Sailor Scout?

I know I’ve been meaning to do this video since last week and its finally here. I’m talking about 5 popular anime that I still need to complete. Please don’t hate me because I haven’t finished them plus I explain why in the video. So check out the video to know more.

Remember I come out with new videos every Monday, Wednesday, & Saturday. So be sure to click the bell icon to turn on post notifications so your notified when a new video is released. Also be sure to subscribe if you’re enjoying my content.

5 Popular Anime I Need To Complete

Hey everyone! I finally have a review and it’s on season 3 of Sailor Moon Crystal! I hope that you enjoy my review and please subscribe if you haven’t already!

Since I was off work this weekend I decided to finally finish Sailor Moon Crystal especially since it is finally finish airing. But let me just say I was definitely disappointed over how it turned out.

Now I was definitely a fan of the first series since it was the first anime I watch as kid so I’m not saying I didn’t like it because it’s not like the original. Trust me I definitely thought of Sailor Moon Crystal as its own separate show. The biggest problem I had with the show was the plot and the characterization.

For me I felt like Sailor Moon a Crystal’s plot was just wayyyyy too serious and way to focused on Usagi and Mamoru’s relationship.

While watching Sailor Moon Crystal there were just way to many moments were Usagi was crying or they were constantly fighting someone or trying to figure something out. There were never any moments were they were having fun. This was one moment where I honestly missed filler episodes in a show. I mean I also read the manga and Crystal is supposed to follow the manga more closely and even in the manga there were filler chapters and laughter.

Now for characterization I feel Crystal took a huge hit with that and I think it’s because of the focus on Usagi and Mamoru so much. I feel that none of the other Sailor Scouts were properly introduced with their different personalities and background. This for me caused me to know really have an attachment to them and the only characters that I felt attachment too were Usagi and Mamoru. Well at least that was the case for the Dark Kingdom arc.

When it came to the Black Moon arc there was definitely some character development which saved the show just a little bit for me.

That being said the whole show wasn’t completely bad. I definitely enjoyed the Black Moon arc the most. There was a lot more action which was great to see and great character development beyond Usagi and Mamoru. Also the opening for Crystal was just amazing and I couldn’t help watching it every time I watched an episode.

Overall though even with the better arc when it came to the Black Moon it still couldn’t save the show for me. I ended up giving this show a 5/10. It wasn’t completely bad but I definitely didn’t enjoy it like I thought I would. Hopefully the next season is better if they have realized the mistakes that was made with this season.

I can’t believe that we are already on episode 21 of Sailor Moon Crystal and this weeks episode gave us quite a bit of back story on both the Black Moon Kingdom and on Chibi-Usa.
The episode starts off with the kidnapping of Usagi by Prince Demande and her waking up in their hideout.

There Prince Demande explains how he and his allies discovered Nemesis and why they are using the power of the Black Crystal. The he kisses Usagi which was just so wrong.

Back with our heroes they are trying to figure out how best to rescue Usagi and Chibi-Usa’s past is revealed. She can’t use the Legendary Silver Crystal and she is 900 years old! What!!!! But Chibi-Usa also explains why she took to the Crystal and it was because she was being bullied. She also believes that all of this is her fault because she took the Crystal. 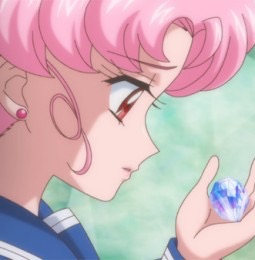 Also in this episode we catch a small glimpse of the rest of the kidnapped Sailor Scouts. Which I absolutely loved and I hope they are back for more in the next episode. Also since the episode ended with Chibi-Usa being influenced by Wiseman I can sense that Black Lady is going to be making an appearance soon.

I give this weeks episode a 8/10 mostly due to the backstory that was explained in this weeks episode. There wasn’t a lot of action but I still enjoyed it and I definitely look forward to the next episode. But what did everyone else think of this episode? Comment below and let me know!
~Anime Reviewer Girl!
Follow Shay Taree on WordPress.com